Article for Catholic365---hope you enjoy.

Since I Was So Rudely Interrupted...by myself

Several years have past since I last shared some opinions.  Although now I don't think the action is any longer called 'sharing opinions' instead the world has dictated that it is now 'influencing'

I guess I'm an influencer?

While much has changed in the world---AND THE CHURCH---somethings still remain unchanged, namely the spiritual quest.  Sure, some new enticing things are out there--seeking to bring solace and peace and fulfillment--IN THIS WORLD.

I haven't regularly posted for many years.  Burnout or depression or hopelessness or just feeling that what I had to share really didn't make any difference--all of this I'm sure contributed to my decision to stop writing.  I guess I was 'interrupted' by none other than myself.

So, as I was saying before I was so rudely interrupted (by myself)--I believe that while the world has been throwing quite a few curve balls and downright demonic crap our way---that now is the time to speak, to write, and to take a stand for what is honest and right and truthful.

Agenda's are everywhere.  The world is 'woke'.

Well reader, here is my agenda--prayer, scripture, fasting, rosary, confession.  There you have it, nothing hidden. The following entries will meander through that agenda hopefully inviting you deeper into the spiritual quest.

May God bless this endeavor.

St. Michael pray for us.

This entry is really an elongated response to my friend, Fr. Len Stoviak's reflection found posted on his blog; Journey Thoughts.

I follow his thoughts and musings simply because I know his story and it's good.
He's waiting for a new bishop to be assigned, and if I am keeping track it will be his fifth.
But that isn't his only concern....

It grieves me terribly to see our churches less that full, and most importantly to see major celebrations at the Cathedral and elsewhere poorly attended.  It speaks of a lack of pride or of apathy or of schedules that are too busy, but it does not speak of vibrant faith and joy.  Bishop Coyne in his homily of installation the other day in Burlington, VT spoke of someone whose conversation he overheard that chose a "mega church" over the Catholic Church.  The person said of the Catholic community that "it was like they mourn their religion".  He said that he could relate to that statement, and so can I.  He went on to say that "If we are going to call people to our churches and they do happen to come in, what will they find?  People who have the joy of the "good news" in their hearts, people who are welcoming and encouraging, who celebrate the Church's liturgy with care and commitment or a people who `mourn their religion`."     We have been blessed with four very different bishops, each bringing their own personalities and talents to the job - one was a big city priest and bishop called to the "country" ... one was an inner city pastor who came as a father figure ... one came as an administrator and was often misunderstood ... and one came with a diplomatic background.  I realize this is over simplistic, but that is my observation.

It doesn't sound too hopeful.  First, the new bishop's comments--yep 'mourning' the religion.  It isn't anything new.  During my time as an episcopal rector, one vivid memory I have (unfortunately) was when I preached a sermon asking the few church goers, "What would someone see if they were to walk over our landscaped grounds and peek inside our beautiful windows?"  I went on to share my observations....which probably contributed to my getting fired a few months later.

Unfortunately we have many bishops who are bishops simply because, as priests,  they made it to a certain age without a personal scandal and no hair raising episodes in their ministerial career (and I use career on purpose to show how far off we are in describing ministry).    Vanilla is the flavor.  Really can't go wrong with it and it does nothing to inspire.  And, while we are at it--a good operational definition for 'inspire' would be--a creative shepherding of the soul to God.

Vanilla--Nothing.
I'm so glad Fr. Len didn't use the word 'leader' when it came to bishop.  Back in the 90's leadership and its study was the cash-cow of universities and even clergy gatherings.  It was a waste of time.
You can teach parish administrative leadership in one hour with a good computer program.
You can't teach inspiration.

Inspiration fills the pews, not some leadership approach.
Solid liturgy, across the board, not focusing on the life of the priest--fills the pews.  Don't have a dramatic performance of a liturgy that can easily be confused with some kind of re-enactment in order to keep the people 'entertained.'
Inspiration.  The 'leaders' have lost their sense of inspiration, and we continue to validate and promote the process.

Sorry this sounds a little tough--but really what is it going to take?
Another celebrity priest?  Another media brainstorm and blitz?  Another re-envisioning, re-inventing the church?  I recall one such diocesan meeting where we were all going to discuss a book--because that was the new movement in leadership--and the speaker never showed!  As a priest, (and I share this from a glass house where I failed miserably many times in the life...but that said) I probably should have been visiting the hospital or praying or offering some sort of personal or communal sacrifice--anything that would have been more 'priestly' than sitting in a convention hall spending time being taking in by nothing more than a book selling gimmick.
So what is it going to take?  Another book...series...or movement?  Another academic process, degree, or relearning?  Another sports program that is masked as 'fellowship'? Another mis-allocation of funds in the name of outreach and ministry and ecumenism?

And now for the 'not-so-good-news'...
I don't think anything will change when it comes to the forms of ecclesial leadership that Fr. Len enumerated.  Actually they've had quite the spectrum.  And guess what?...it doesn't sound promising--little to no growth, more financial challenges, less clergy, probably more discontent among the laity, little to no collaborative ministry because it probably is the same people doing the same things just in a different way or at a different church.

Sounds as if the diocese, barring any inspiration, is on the path to geographic division and 're-allocation'--i.e.  spilt up and given to neighboring dioceses. After all isn't that what the current corporate movement and model of church dictates?  1. merge schools, 2 merge parishes, 3 merge diocese.  It is a linear progression that is dictated by many factors.  Sometimes those socio-economic factors are contained as in some rural communities.  However, when a cathedral is described as being empty--well that is indicative of something much greater and this is not the moment to speculate.  Because speculation really does nothing.

Suffice it to say that Fr. Len describes and empty church--how sad...how vanilla.

I have a little bit of a story when it comes to my public faith life--but I have to be honest, I have never been more uninspired than now when it comes to the lived experience of Church.   I have quietly and quickly become that middle age man who sits in the pew and closes his eyes.
I sit at the church blind and waiting to see the Messiah- nothing more, nothing less.

Fr. Len labels his blog with 'What Do We Need?'
I would venture to say... True Inspiration. 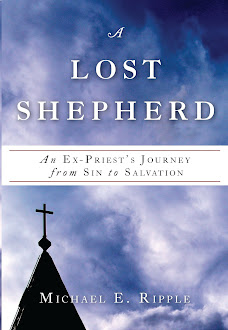 Reviews of A Lost Shepherd

Sometimes being unable to forgive our selves is the greatest obstacle to God. In his fascinating memoir, A Lost Shepherd, Michael Ripple gives us an insider's view into the life of a troubled priest and the soul of a man. He invites us along on his journey as he learns to embrace his new vocations of matrimony and fatherhood, and to forgive himself for turning from a call he first heard in his childhood. Whether or not Ripple feels worthy, the Blessed Mother is always by his side, filling him up, loving, healing, guiding, the sun trying to dawn in his heart. --Beverly Donofrio, author of Looking for Mary (or, the Blessed Mother and Me)